Innovative product that accelerates the development of colonies, increases their productivity and stimulates the laying activity of queen bees. Now offered in two forms: encapsulated (90 caps) and powder (20 g).

Innovative product that accelerates the development of colonies, increases their productivity and stimulates the laying activity of queen bees. Now offered in two forms: encapsulated (90 caps) and powder (20 g).

The tests performed on bees show that the stimulative feeding of the bee colonies with inverted sugar syrup with the addition of VemoHerb® BEES at a dosage of 10 mg/kg bees, shows extremely good results on the laying activity of the queen bees as well as on the productivity, activity and stability of the hive as a whole.

The reported higher percentage of bees that survived through the winter in the colonies, nurtured by VemoHerb® BEES, is an indicator of normal development and sustainability in their worst (winter) period of life. Also, the increased activity of laying queens tends to strengthen the beehives.

The study shows that stimulative feeding of bee colonies with VemoHerb® BEES leads to the development of stronger colonies that make best use of the available pollen.

The application of VemoHerb® BEES shows significantly more positive effect on the strength, activity, productivity and sustainability of colonies compared to other stimulators present on the market. Considering the better development of the colonies (greater amount of raised brood and available bees) and higher honey productivity, as well as the low cost of  VemoHerb® BEES, the efficiency of its use to increase the productivity of beehives and to stimulate the laying activity of queen bees is clearly shown. It is also essential to note the natural origin of the product. The main ingredients are biologically active plant extracts, thus differentiating it from alternative synthetic products on the market.

VemoHerb® BEES is an innovative product based on a homogeneous mixture of plant extracts. The general physiological action of the product is determined by the high content of biologically active substances: furostanol saponins, flavonoids (apigenin, rutin, kaempferol), aromatic ketones, coumarins and polyphenols. 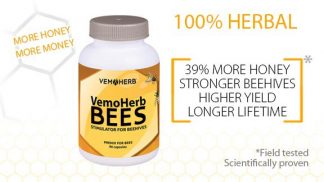